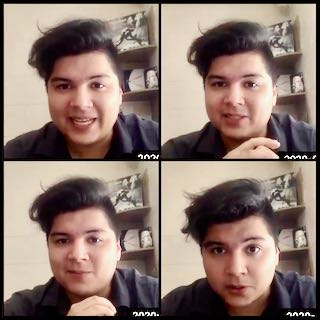 Miguel Moreno is a candidate for Juris Doctor at the UArizona James E. Rogers College of Law. He focuses on protecting and promoting Indigenous peoples' rights and is currently interested in tribal water law. Miguel is part of the Indigenous Peoples Law and Policy Program (IPLP) at the UArizona.

As part of the Haury Program Tribal Initiative, Miguel Moreno is assisting Dr. Sharon B. Megdal, Director at the Water Resources Research Center, WRCC, in planning the next WRCC Annual Conference. The WRCC annual conferences began in 2004 to bring leaders, experts, researchers, and the wider community together to discuss water issues in the Southwest. Miguel sees the WRCC annual conferences as a platform to raise awareness about water problems and a chance for people to see different perspectives and bring together people's vision for the future. As he said, "That's super powerful."

Miguel Moreno is eager to learn more about water settlements and reforming the water law system to assist the thousands of Indigenous peoples affected by COVID-19 due to water inaccessibility. He is personally interested in building on the 2015 annual conference, Indigenous Perspectives in Sustainable Water Practices, about learning Indigenous perspectives on water, using traditional knowledge to improve water management, and exploring water stewardship, challenges, and achievements with tribal communities. Miguel says that assisting Dr. Megdal has allowed him to collaborate with various people and perspectives, including experts from tribal communities, and adds that "This is exactly what I was looking for; it just seemed like an ideal to me, honestly, and I've enjoyed it so far."

"It's been awesome being a part of the Indigenous Peoples Law and Policy Program. They have been the most welcoming and helpful bunch of people I ever could have imagined I would encounter in law school."

Miguel Moreno was born and raised in Portland, Oregon, and decided he wanted to be a lawyer when he was a little kid. "I used to argue with my parents all the time, and my family said 'well, I guess we do need an attorney in the family.' It's always been on my radar."

Before moving to Tucson to study at the UArizona, Miguel earned a Bachelor's degree in Economics from the University of Puget Sound in Tacoma, Washington. "There are no lawyers in the family. I know that heading into law school was a completely new venture for us. And it's been amazing. It's been a real dream come true so far." Professor Robert A. Williams Jr. was crucial in Miguel's decision to join the UArizona. Miguel says that Professor Williams has supported him throughout his career. "The UArizona has provided me with all the supporting tools that I needed. [The College of Law] has a diverse and welcoming environment. I'm learning from professors that are international professors that come from tribal backgrounds. It was the best fit for me."

Miguel says his father has been a role model for him. "Since I was in elementary school, [my dad] would talk about the importance of getting a good education. He didn't learn English until he was in first grade. He is a first-generation college student, and he recently earned his doctorate. He's absolutely the hardest worker I've ever met. Both of his parents were migrant workers, so he kind of just made that pathway himself. So when it came time for me to start high school and college, he made sure that I had access to the best college I could get into. He taught me to take advantage of the tools around me and make the most of it. I can say that education is one of the most important things that I've ever gotten. I'm incredibly thankful that I've had role models around me. That can change your life."

The Haury Program applauds Miguel Moreno and looks forward to stating in touch with him through the ever-growing network of UArizona faculty, students, and staff promoting Indigenous people’s rights.

Miguel has some advice for students: "get out of your comfort zone and find people who support you." Miguel says it may be challenging, and you may even stumble at first, but you may eventually find some areas where you feel more at home than you ever thought you would. Moving from Washington to Arizona pushed Miguel’s boundaries, and he couldn't be happier. He says that it's essential to find people willing to share their experience and perspective with you; either peers and teachers or administrators could help. "Be an active part of your community, and never stop growing."