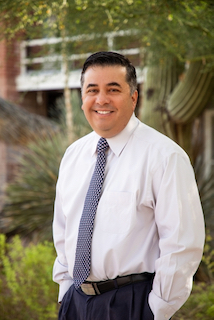 As a first-generation Native American college student, SVP Esquerra recognizes that Native students face unique challenges. He mentions that family support was crucial for him and his six siblings in pursuing college degrees – five of them, including Esquerra, have advanced degrees. “My mom,” says  SVP Esquerra, “was a big advocate for education; she was one of my heroes in that regard. She instilled in me the value of education at a very young age. It wasn't if I was going to go [to college]. It was where I was going to go. I was so grateful for that.”

Not everything was easy for SVP Esquerra when he started college. He still remembers his first class, Algebra. “I walked in, and it was an auditorium, and there were more students in there than the whole student body of my high school. And that was kind of a culture shock. In the same breath, I started to understand not all places are like where I grew up and [I realized] there's a lot of strengths where I grew up. And then there are some things that maybe I wasn't prepared for when I left [home].” That first experience in college didn’t discourage him. Now SVP Esquerra advocates for students reaching their true potential, which he believes is the real definition of success.

SVP Esquerra is convinced that Native students’ support should be accompanied by a strong commitment from the university to build programs and research capacity to engage with Native students and communities in honorable and respectful ways. His more than 20 years of experience collaborating with tribes has led to long-term positive impacts. For him, collaboration is about getting to know each other, engaging and learning, and respecting different viewpoints. He says UArizona has given him a great opportunity and a big responsibility to engage tribal and university leaders to pursue common goals and build long-term collaborations.

SVP Esquerra has some suggestions for engaging deeply with Native nations:

“First, get to know the people, their culture. Visit their communities. Second, take time to engage and learn firsthand from them: Listen and share. If you have empathy and learn from one another, you grow. Third, build on commonalities. We all have common goals: a clean environment, a thriving economy, a healthy life. And four, always, always, follow up; it shows respect. [Building a relationship] takes patience. From patience comes respect. And from respect comes trust.”

SVP Esquerra supports tribal sovereignty, believing that tribal sovereignty presents many challenges but also great opportunities. He understands he’s not starting from zero and is ready to build on UArizona’s talent and resources to engage respectfully with Native Nations. He believes that connecting tribal leaders and elders with senior leadership, faculty, and staff to share experiences and learn from one another is a critical step to a long-lasting relationship.

“I've visited several tribes many times, and I'm still learning. But I think we all have a passion for learning. And that’s one of my goals-- for everyone [at the University and elsewhere] to say, ‘Yeah, I've been to this tribe, and I went to this tribe and I learned and grew as a person. I have a better understanding of the tribes, their culture, and their way of life. ’” SVP Esquerra has visited other tribes outside the country, including a visit to Indigenous tribes in Argentina and Canada.

Senior Vice President Esquerra earned a bachelor’s degree from Brigham Young University, where he studied communications and sociology, and a master’s degree in social and economic development from Washington University in St. Louis. He sits on the board of directors for the Arizona Rural Development Council and the Local First Arizona Foundation.

“Understanding and feeling the importance of developing strong positive tribal relations is not a task to be taken lightly, and SVP Esquerra with his background in working in higher education institutions and tribal governments is equipped to strengthen these relationships with his unique background. In a state that has over 20 federally recognized tribes, one of which is the largest Native American reservation in the United States, it is important for Native American students and nations to feel the support the University of Arizona has in tribal engagement to promote success. Having SVP Esquerra at the University of Arizona is one step to enhancing that promotion of success for the Native American community.”